There is one central common theme to all of Armageddon's past — at least for the last 40 years. They unfolded, struck, did their damage, and then ended — all at higher prices in markets than the previous Armageddon.

Mind you, in every case, the previous Armageddon was "it" we were done. Unexplainable forces would never allow us to get over it, beyond it, or improve from it. It was always very clear this was the case — at the time, each was unfolding, just like now.

That manic-depressive, emotionally charged reactionary process "prices" values as vastly different. It is the hallmark of darkened perceptions, a dim view of the future, and fears that are being juiced each and every minute of the day by a media process that has become the real weapon we should all be worried a bit over.

We will hear an overwhelming amount of noise over the next few weeks as earnings begin flowing, projections from management being sliced and diced (and twisted), GDP levels will be agonizingly covered, and inflation reports will be reported in every manner possible to leave you terrified.

The "View" Before The Headlines

Inflation reports arrive later this week for "June." By the time you read the headline, know this:  the data you will be told about has already happened - and has changed very dramatically for the good. The data you will "see" is from early May to early June. I have peppered the morning notes with many charts of commodities that were previously "the culprits to the worst inflation we have seen for 40 years destroying the lives of all consumers", or something to that effect.

The issue is that the bell curve has indeed unfolded - and right on time. You won't "see" it for a bit still.

Why is this vital to understand? Because the press will not point it out for you. The best magicians you have ever seen perform, the sleight of hand will be mesmerizing for most. It will be doomsday - except it will be a facade.

Here is the US GDP output chart directly from the St Louis Fed reporting site:

That's the big picture slope since the 50s. The grey bars are marking official NBER recessions.  Take note:  Since 1992, there have been three - the tech bubble, the Great Recession (08-09), and the Pandemic (for two months).

In time, it will be very difficult to even see the spikes down in 08-09 and the pandemic shutdown - just like one can no longer see the previous recessions.  Funny how time changes perception, no?

Let's look at the same chart more closely. First, the red and blue boxes are the same data.  The blue is simply a large version of the red so that you can more easily read the GDP status at the end of 2021. Yes, the same 2021 which ended about six months ago - just before the "worst six months the market has seen in forty years."

The point of today is about understanding these larger events we have been expressing for months. Why? In the end, history proves the underlying current pushing you forward rules the day. The short-term chatter about "worst this and worst that in some X period" usually - like in now - means nothing. It is designed only to do what has been accomplished:

a. Keep your attention - and we all know it does because I am on calls each day with new clients repeating the same "concerns", which just so happen to also be exact duplicates of the myriad of repeating headlines.

b. In keeping you "scared of the market", it forces you out of the market just when it is most valuable - in terms of the pace set for future gains.

Remember, the spring-loading effect.  The reason most do not is that at its start - right now - while the future rate of return is being built - it looks ugly, shrouded in "terrible" news, and flanked by hurdles that always - and I do mean always - appear insurmountable.

The issue is they are not insurmountable - and never have been. No Armageddon before us has caused the end of the world - right?

Back to the chart above - note the green box.  It is a different GDP number - up through June 29 Fed records.  Notice that number is larger at $$24.386 TRILLION in US GDP output.  Sort of strange - no?  Nothing but headline after headline of us "being in a recession" - and yet - the number on June 29 is larger than the number on 12/31/21, six months earlier.

The bottom line here? IF the media succeeds in pressing some party to title this period ahead "a recession," so be it. However, it will indeed be based on definitions we started with 50 years ago, and yet, little in our world, anywhere, is how it was 50 years ago.

That said, it will become a recession noted in the title "like never seen before," in that it will occur with:

What is the price in these issues?  A temporary squeeze on all supplies, systems, factories, and supply chains - to rebuild and re-route in a manner that will better serve a new - higher - equilibrium we have in the US economy.

Why do we have this new higher equilibrium? 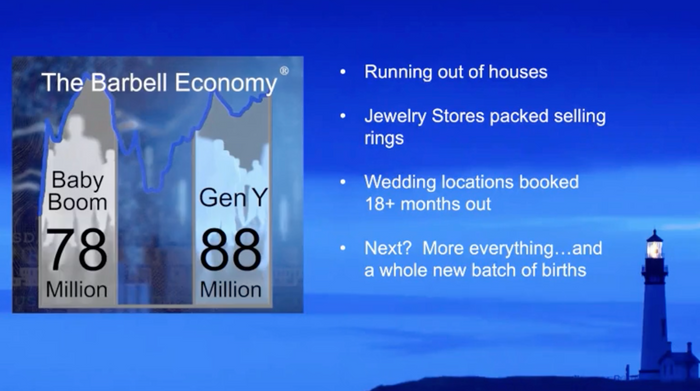 Generation Y is growing up, and the 80s and 90s will repeat.  The US is the ONLY developed nation on earth with this type of healthy demographics - driving demand and future growth for decades to come.

Do NOT forget what we can rest our patience on as these messes will unfold along the pathway:  the humans which will drive the US economy and consumer demand for the next 50 YEARS are already alive.  They are already here - in the US.  We just need to plant seeds in front of all those doorways of demand - and wait.

Fear levels - in all measurements and position tracking available - are setting records.

Here is an interesting one - hedging levels for the audience are now at "record - all-time highs": 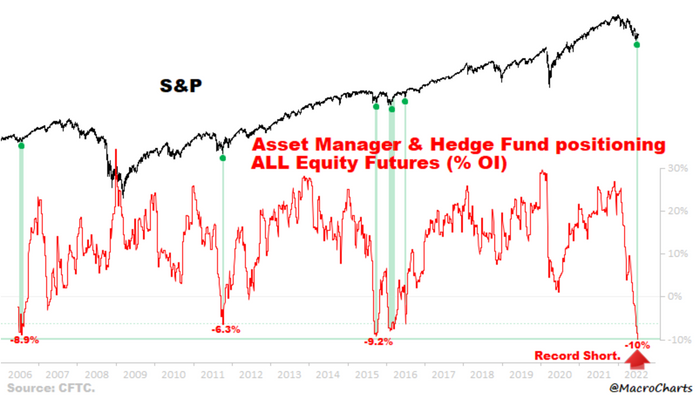 The chart above depicts the highest readings of hedging across the board and is supplied by the CFTC weekly in reporting requirements.

It is helpful to note the previous records - each being low windows in time when viewed in the rearview mirror.

The only way to win the game of emotion which causes so much struggle in so many lives?

Instead, stay focused, patient, disciplined, and on your pathway.

Be confident that the Demogronomics® energy underlying our US economy is stronger than most remotely understand.

The forces at work driving us forward to better are immense and overlooked.

The fear-mongering narrative is as old as the hills, and the road is littered with naysayers.

It is challenging - that's why the future returns are significant over time - as they have been for 40 years.

US companies are reshaping the economy to prepare for a tremendous run - driven by the most significant forces of demand ever to hit the US economy. It is not supposed to be pretty - or easy. The process that got us here was nasty - and fixing it will be too.